Nonprofits that are tax-exempt as N 501(c)(3) organizations, including charities and churches, are barred from participating or intervening in any political campaign for or against a candidate for public office. Organizations that violate the prohibition risk losing their tax-exempt status. They also could find themselves on the hook for an excise tax. Here’s what you need to know to keep your nonprofit on the right side of the political activities law.

What are the rules?

According to the IRS, an organization intervenes in a political campaign if it:

Your nonprofit can, however, conduct nonpartisan activities that educate the public and help them participate in the election process.

Some politics-related activities or expenses may be permissible depending on the facts and circumstances. For example:

Voter education activities, such as publishing voter education guides, don’t constitute prohibited activity if conducted in a nonpartisan manner. That means your organization and the people conducting the activities should avoid mentioning candidates or political parties in communications about the activity. Such communications include publicity, posters, registration materials and handouts.

Activities intended to encourage participation in the electoral process also aren’t considered prohibited activity if conducted in a nonpartisan manner. Your nonprofit should do no more than urge people to register and vote or describe the hours and places of registration and voting. You must offer any related services, such as voter registration forms or transportation to the polls, to all, regardless of political persuasion.

You may publish voting records to report the activity of a legislative body but not to comment on an election campaign. Voting records can represent political campaign intervention if they identify any incumbent as a candidate or com-pare an incumbent’s positions with those of other candidates.

You can continue to advocate issues during a campaign if your activities don’t constitute campaign intervention. For example, you risk intervening in a political campaign if your message invites the recipient to compare a candidate’s position on an issue with your organization’s views.

The message needn’t directly urge a vote for or against a candidate or even mention the candidate by name to violate the ban. You can improperly imply the specific candidate simply by using labels such as “conservative,” “liberal,” “pro-life” or “pro-choice.”

If you invite a candidate to speak in the role of a candidate, you must give all qualified candidates an equal opportunity to speak. For example, if one candidate speaks at your annual meeting and another at a sparsely attended committee meeting, you haven’t provided equal opportunities. In addition, you must make clear that you neither support nor oppose an invitee’s candidacy.

A candidate also can appear in another role (for example, discussing a topic other than an election). You must clearly indicate the capacity in which the candidate will appear in any announcements, maintain a nonpartisan atmosphere at the event and ensure that no campaign activity (including fundraising) occurs. And your representatives can’t mention the campaign or candidacy.

One way around the risks of candidate appearances is to hold a forum with all of the candidates invited to appear together to answer questions. You must see that every candidate is treated fairly and impartially. It’s best if the questions are prepared and presented by an independent nonpartisan panel and the discussion covers a wide range of issues. The moderator and the forum’s sponsors also should refrain from commenting on the questions, answers and candidates.

Your organization’s representatives are, of course, free to make partisan comments as individual citizens speaking in a nonofficial capacity. But they need to make clear that their comments are personal and don’t represent the views of your nonprofit. If they don’t, they could put it at risk. 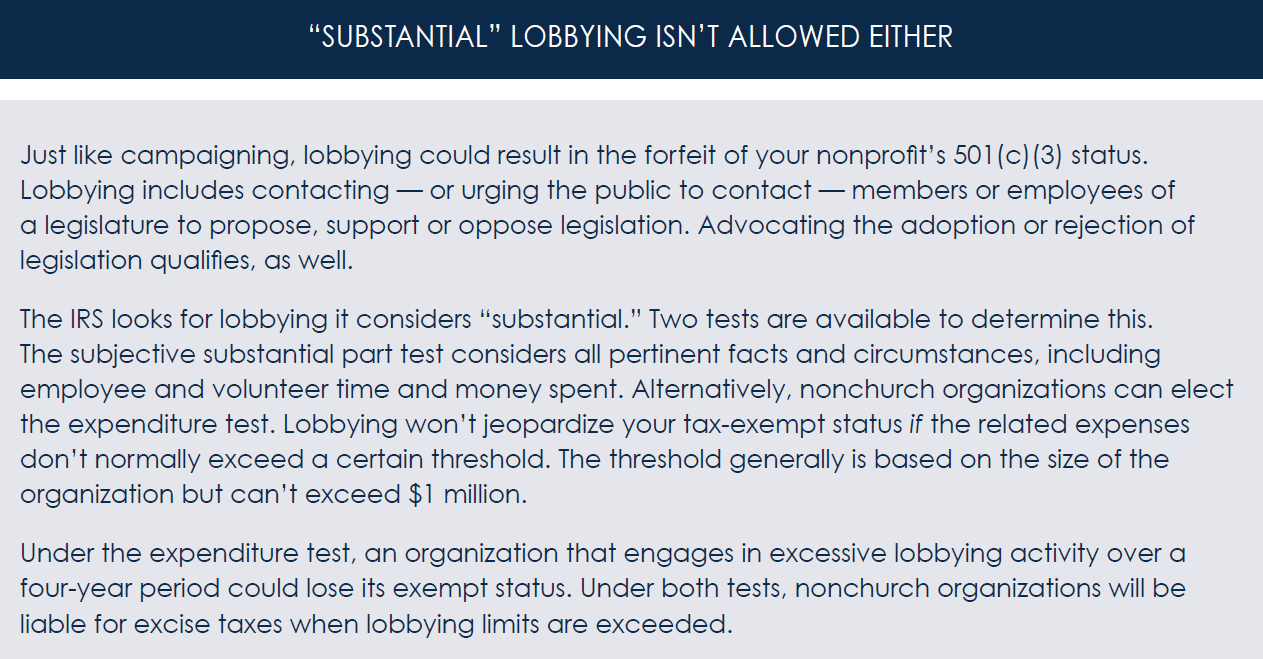 To learn more about how our firm can serve your nonprofit organization, please contact Dave Wolfenden at (302) 254-8240.

The articles in this blog are published with the understanding that the authors are not rendering legal, accounting or other professional advice or opinions on specific facts or matters, and, accordingly, assume no liability whatsoever in connection with its use.