The second schedule of a WIP report is “Contracts Completed.” It tracks jobs completed during the statement year.

Schedule 2 shouldn’t contain a “billed to date” or an “estimated cost to complete” column because these jobs are completed, and the revenues already earned. Some Contracts Completed schedules may have receivables due, but those receivables aren’t relevant to reported earnings.

Schedule 2 needs to specify jobs that spanned more than a year and that were completed during the current year. To do this, a middle portion of the schedule shows revenues and costs that were already recognized in previous years’ financial statements for projects completed in the current year.

The Contracts Completed schedule relates to your financial statements in that only those revenues attributed to the current year on this schedule should appear in the income statement as revenues for the current year. This is important because revenue reporting on the income statement must be calculated properly or earnings can be grossly distorted, putting misleading information in the hands of financial statement users such as lenders and sureties.

The centerpiece of the WIP report is Schedule 3, “Contracts in Progress.” It lists all jobs in progress at the end of the year, regardless of whether they started during the year or in earlier years.

Perhaps the most important feature of the Contracts in Progress schedule is the portion that lists the revenues, costs, gross profit, billings to date and other data points for each project since its inception. This is key because the “costs and estimated earnings in excess of billings” and “billings in excess of costs and estimated earnings” columns reflect each job’s offset from billings to earnings since you broke ground.

This schedule also helps illustrate how the balance sheet relates to the income statement. Your CPA can use the Contracts in Progress schedule to verify the percentage of completion calculations on each job by taking the total costs to date on each project and dividing by the contract amounts. This way, each job’s calculated earnings and total costs will add up to the total reported earnings and the reported costs on the income statement.

The fourth schedule of a typical WIP report is “Contracts Receivables Detail.” This is a fully articulated record of your accounts receivable, showing not only what’s owed but what has been paid and the portion of each contract yet to be billed (in other words, your backlog).

Schedule 4 lists the total contract amount of each project. You can see what jobs are in progress because they’re not yet totally billed. The billings on those projects should match the billings for those same jobs in the Contracts in Progress schedule. Jobs that appear on both the Contracts Receivables Detail schedule and the Contracts Completed schedule must be completely billed out.

Careful tracking of your accounts receivable on WIP reports is critical to verifying the accuracy of your financial statements. For example, accounts receivable appear as an asset on your balance sheet. So, showing a high amount of receivables will reflect positively on your company because it strengthens current assets. Of course, you’ve still got to be able to collect these receivables in a timely manner. 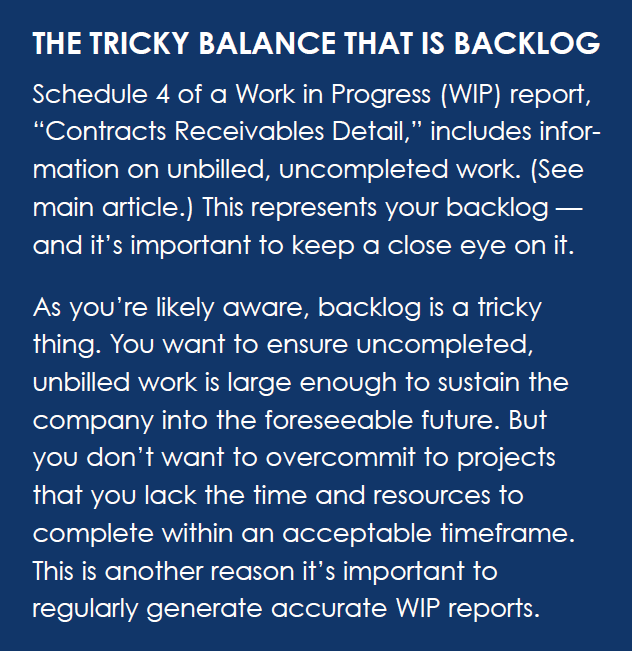 When contractors generate WIP reports regularly and accurately, their financial statements benefit immensely. Work closely with your CPA to do so and you’ll put yourself in a much better position to avoid unpleasant surprises and build your bottom line.

We welcome the opportunity to put our construction industry expertise to work for you. To learn more about how our firm can help advance your success, please contact Dave Wolfenden at (302) 254-8240.

The articles in this blog are published with the understanding that the authors are not rendering legal, accounting or other professional advice or opinions on specific facts or matters, and, accordingly, assume no liability whatsoever in connection with its use.